Liopleurodon was a genus of pliosaur that inhabited European seas during the Middle to Late Jurassic Period. This large member of the pliosaur family grew up to 10 meters (33 feet) long at the maximum. L. ferox has been found in the Callovian oxford clay dating about 160 million years ago.

The size of Liopleurodon has always been a subject of controversy. The largest skull identified to belong to a L. ferox was 1.5 meters (5 feet) long. As reconstructed by Tarlo, the pliosaur skull was about 1 seventh the total length suggesting Liopleurodon was 10 meters (33 feet) long. However, in another case, Kronosaurus queenslandicus, Tarlo's estimations proved inaccurate. According to his estimation, K. queenslandicus was 12.8 meters (40 feet). However, a more complete specimen showed the head to body ratio was slightly larger, the head being about 1 fifth the overall length. If the same estimations can be applied to L. ferox, the overall length would be about 5-7 meters (21-23 feet). However, bite marks made on Leedsicthys match teeth marks of Liopleurodon so it would need to be between 12-16m (Leedsicthys was 16-22m). A 15m specimen has been found to be 15m (49 feet) and 58 feet (17.6m) respectively which are believed to be part of the same genus. Most consider 7-10m (23-33 feet) to be most accurate.

Liopleurodon's powerful jaws were lined with long conical teeth used for grabbing prey such as ichthyosaurs, fish and other marine animals. 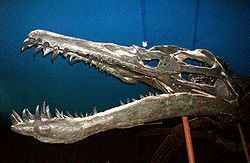 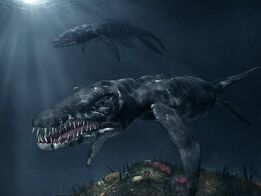 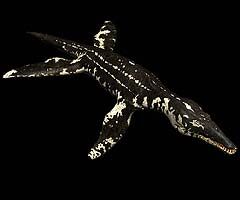 Liopleurodon as it appears in Walking With Dinosaurs
Community content is available under CC-BY-SA unless otherwise noted.
Advertisement