Paleopedia Wiki
Register
Don't have an account?
Sign In
Advertisement
in: Proceratosauridae, Articles and Pages, Tyrannosauridae,
and 2 more

Kileskus was a genus of basal tyrannosaurid from the family proceratosauridae. The holotype specimen was discovered in Krasnoyarsk Krai, Russia, is a partial skull, hand and foot. Kileskus, in life would have been about 3 meters (10 feet) long and similar to Guanlong and Proceratosaurus. Kileskus lived during the Bathonian Stage (Middle Jurassic) and would have hunted small dinosaurs. Like its relatives, Kileskus was probably covered in small proto-feathers and had a nasal crest running along its head. 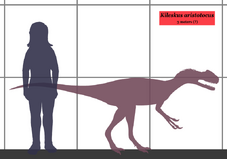 K. aristotocus compared to a human for scale 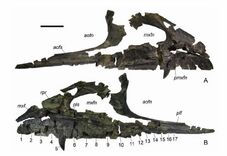