Gorgosaurus was a Genus of tyrannosaur from the family Tyrannosauridae. It lived during the Campanian Stage of the Late Cretaceous in North America. Not quite as large as the famous Tyrannosaurus or the Asian Tarbosaurus, Gorgosaurus was a medium-sized member of the family, measuring about 8-9 meters (26-30 feet) in length. This put it at closer size to the similar Albertosaurus and Daspletosaurus.

Anatomy The skull The skull of this dinosaur measured 99 centimeters (39 inches) long, which made it not as large as Daspletosaurus' skull but quite close. Relative to the body, the skull was large, which is common in tyrannosaurus.The end of the snout was blunt, and the nasal bone was fused along the midline of the skull, as in all other members of the family. Gorgosaurus had more teeth than Tyrannosaurus or Tarbosaurus, with 26 to 30 maxillary teeth and 30 to 34 teeth in the lower mandible. The teeth were typical of tyrannosaurids, with the front teeth having D-shaped cross sections, and the back teeth serrated with oval cross sections. also shaped like the premaxillary teeth.

Gorgosaurus had a typical body plan for tyrannosaurids, A massive skull counterbalanced by tiny arms, each with two visible fingers, and on reduced, vestigial metacarpal finger. Gorgosaurus' vertebrae would have been horizontal to the ground and its tail held erect for balance. Gorgosaurus had femurs measuring 105 centimeters (41 inches long). The tibia longer than the femur, common in fast running animals. The foot had three tows that reached the ground and one vestigial hallux that never reached the ground.

Fossils from the Dinosaur Park formation suggest that Gorgosaurus coexisted with the less abundant, but slightly larger Daspletosaurus. It is rare example of different tyrannosaurids to coexisting. To limit competition, they probably filled different ecological niches. One theory was Gorgosaurus preyed upon the more abundant hadrosaurs, where as Daspletosaurus, being heavier built preyed upon ceratopsians. However, Daspletosaurus remain have been found with hadrosaurs in their guts. Unlike with other coexisting large predators, they don't appear to have lived at different elevations so, their ecological rolls is still a mystery. Perhaps one actively hunted, where as the other scavenged, like with lions and hyenas.

Gorgosaurus compared to a human for scale 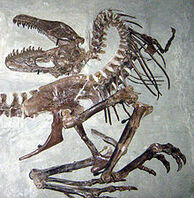